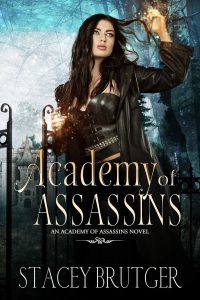 ONLY ONE THING STANDS BETWEEN HUMANS AND THE DEADLY SUPERNATURAL WORLD…THE ACADEMY OF ASSASSINS.

Abandoned as a child and unable to remember her past, Morgan was raised as a hunter, one of an elite group of fighters sworn to protect humans from the dangerous paranormal creatures who invade our world…creatures such as herself. Her life changes the day she’s summoned to the Academy of Assassins, a school that trains witches and hunters to eradicate paranormals who prey on humans. Her first assignment—find and eliminate the killer who is using the Academy as their own personal hunting ground.

As Morgan delves deeper into the investigation, she will need to dodge assassination attempts, avoid the distraction of romantic entanglements with the devilishly handsome security expert, Kincade, and his maddeningly overprotective teammates, while keeping the volatile magic in her blood concealed from those who would use it for their own purposes. When the danger increases and the school is threatened, Morgan must unearth her missing memories before someone finishes the job they started so long ago—killing her and unleashing a plague that will consume the world.

The door slammed open with a bang and Kincade burst into the room, his hair wild, his chest heaving, his eyes savage. He located her immediately, unerringly, as if she was some damned beacon. ​

Pure possessiveness stared back at her, the cold reserve he hid behind when they first met was stripped away completely. The heat in his expression, his ferocity, frightened her more than any monster she’d ever faced.​

She froze as he advanced on her, distracted by his predatory grace and rippling muscles, hijacking her sense of self-preservation. To her surprise, his entire shoulder was covered in the same swirling pattern as her hand, the lines spilling down his arm to his elbow. ​

The more primitive side of her was pleased to see her stamp on him, but more than anything else, it scared her witless.​

He displayed his marks with pride, but the pleasure in his eyes faded as he drew closer, his gaze locked on the arm she’d tucked close to her body. His brows lowered, and he grabbed her wrist, staring down at the second set of markings accusingly, as if she’d somehow betrayed him. ​

“Who is the other person you’ve mated?” The demand was barely more than a snarl. He rubbed at the obsidian line as if he could wipe it away by will alone.​

Morgan jerked away from him, flinging up her hands. “How the hell should I know? I didn’t ask to be marked. This is a stupid, antiquated custom. You can’t really take any of this seriously.” ​

A snarl curled his lips, and her faint hope that he would back her up vanished. ​

“Whether you like it or not, you’re mine, and I’ll do whatever is necessary to protect you.”​

“Oh, dude, wrong thing to say.” Draven dropped his head into his hands.​

The life she’d envisioned vanished, her freedom evaporated before she even had a chance to be free. She narrowed her eyes on him and lifted her chin mulishly. “You can’t force me.”​

“Watch me.” He began stalking her across the room.